I'm the second most famous person to ever come out of Niles, Ohio. This isn't necessarily a big deal. After all, the first most famous person (William McKinley) is best known for being assassinated, and nobody knows who the third most famous is -- and outside of my immediate family and their closest friends, nobody in Niles knows who I am, either. Following some vagabondish early years that saw me resident in Kansas, Texas, and New Jersey, I finished my growing up in Omaha, Nebraska, from where I ran away to the Marine Corps soon after I turned 18. While a Marine I served in the peace time infantry, a tour as a military policeman, and fought a war in Vietnam. Afterwhich I moved to Philadelphia where I studied at the Pennsylvania Academy of the Fine Arts, followed by a too-short career as a award-winning sculptor. Along the way I got married and subsequently divorced. I began writing in 1983. In 2004, I finally had enough of the dreary winters of Philadelphia and moved to the sunshine and warmth of South Florida.

Okay, if you've read the sections on my books, you may have noticed a several year gap between the publication of my eighth book, The Squad, and my ninth, STARFIST: First To Fight. That's not because I voluntarily took a lengthy sabatical. I had sold all of my Vietnam War novels directly to to the publisher without benefit of an agent. While I was doing that, the rules of the publishing industry changed to the point where it became almost impossible for an unagented author to get the attention of editors -- and agents generally don't try very hard for authors from whom they haven't made any money. Well, my earlier novels hadn't sold all that well, either, so that likely had a negative impact. Anyway, even though I continued to write new novels during that gap, I simply didn't manage to get anything published. Some of them are described under the "Unpublished Novels" link on the first page (Onslaught was another). Sooner or later, I still hope to get them published somewhere. Hey, there's some good stuff there, even if I do say so myself.

I have an agent again, my fifth. None of the previous four got any sales for me. This one has done much better. 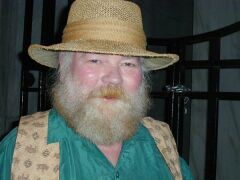 Some readers suspect that Del Rey goofed and reversed the pictures next to the bios on the inside back cover of the STARFIST books. No they didn't. I'm the bearded guy in the hat.